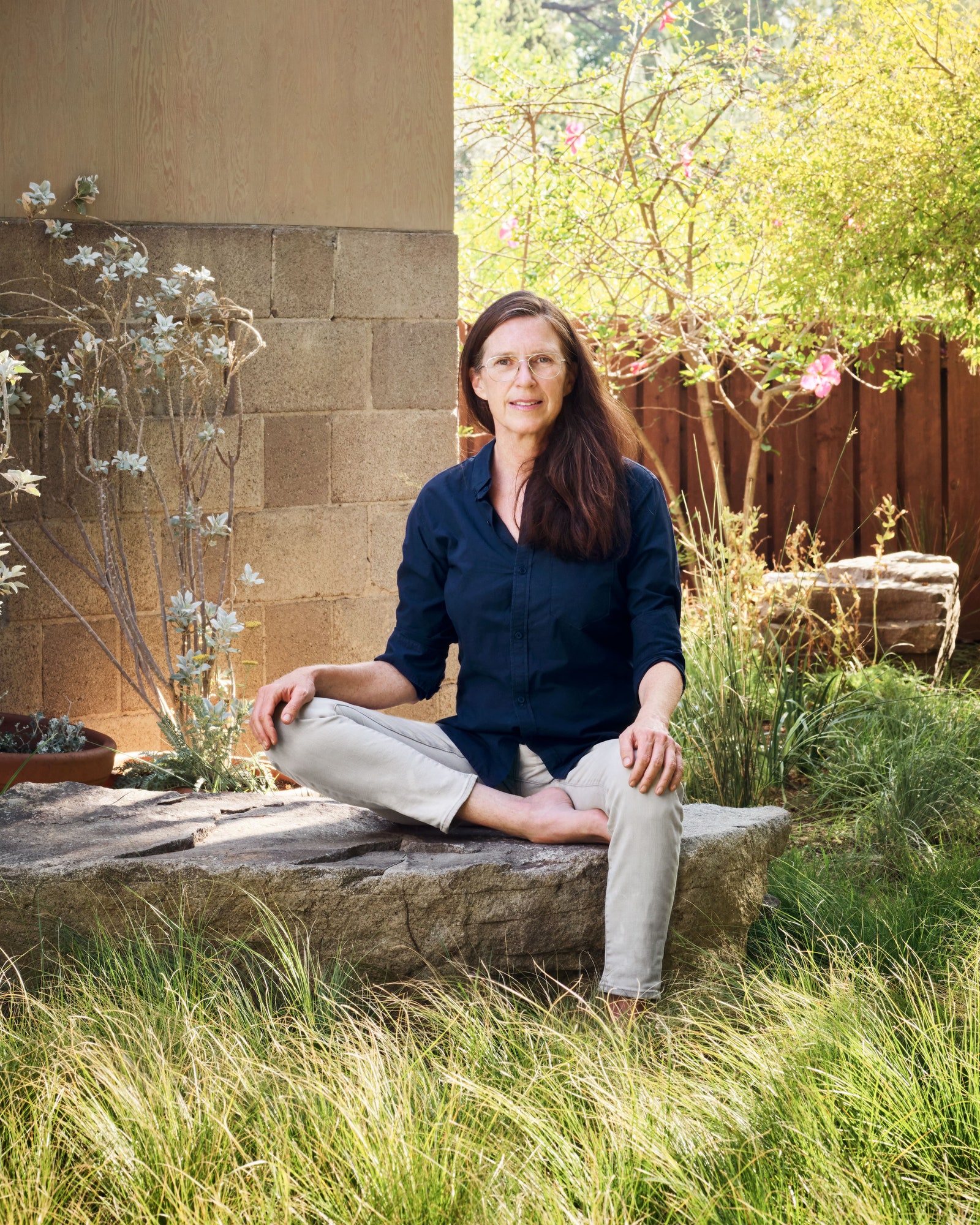 Mary Weatherford’s landmark midcentury-modern house in Los Angeles, artwork and structure work hand in glove. “It’s a beautiful symphony of interwoven diagonals, verticals, and horizontals,” the artist says of the experimental construction, in-built 1948 by architects A. Quincy Jones and Whitney R. Smith in collaboration with structural engineer Edgardo Contini and panorama designer Theodore Payne. “The restoration was like solving a puzzle. We had to figure out which piece of wood is which color, the elaborate interplay between the posts and beams with the floor and ceiling, how certain volumes and forms interact. In a lot of ways, the process was like making a painting in three dimensions,” she provides.

The complexity and historic significance of the venture maybe clarify the roughly 4 years it took to revive the modest 1,500-square-foot, two-bedroom construction. “Mary was obsessive about getting it right,” insists designer Oliver M. Furth, Weatherford’s accomplice all through the odyssey of bringing the residence into the twenty first century with out compromising the architects’ daring experiment in structural and experiential innovation. “She invested huge amounts of time and energy in the service of being a faithful steward of this property. As much as she wanted to honor its past, she wanted to secure its future,” he continues.

“Jones was interested in the disappearance of the boundary between inside and outside. No matter how much work we put into the house, we had to be rigorous in preserving the relationship of the structure to the land,” Weatherford explains, echoing Frank Lloyd’s Wright’s well-known dictum “No house should be on a hill or on anything. It should be of the hill. Belonging to it. Hill and house should live together, each the happier for the other.”

The most dramatic visible transformation concerned the liberation of the unique inside plywood planes from layers of white paint that had been utilized by earlier house owners.“The walls were so white it made your teeth hurt,” Weatherford quips. Fortunately, a pattern of the unique celery-colored plywood stain was found on the within of a drawer within the visitor bed room. And after months of painstaking stripping, the design crew—together with architectural shade advisor Scott Flax and wood-restoration specialist Andrew Gray—set to the duty of re-staining the uncovered plywood to its preliminary cool-green hue.

“Mary’s color sense is different than anyone I’ve ever worked with, and she pushed me in a way that I’ve never been pushed before,” says Furth, a designer maybe higher recognized for august Beverly Hills and Bel Air manses than petite East Side architectural gems. “Color was one of the ways we challenged the strictures of a historic restoration,” he provides, noting the syncopated rhythms of the acid-yellow carpet and purple curtains within the residing/eating room, the juxtaposition of pink and blue tiles in the primary tub, and the eruption of vivid orange textiles in Weatherford’s bed room.

The furnishings scheme represents an olio of treasured keepsakes and objects collected by Weatherford over a long time, all set alongside midcentury classics and signature items
by a bunch of up to date makers. There are Stendig leather-based ottomans the artist has had for 20 years, a pair of Grete Jalk chairs discovered on the road and reupholstered in purple velvet, and a painted-gourd lamp Weatherford made when she was in highschool; archetypal designs by Poul Kjærholm, Hans Wegner, Serge Mouille, and Eero Saarinen; and sprightly modern items by L.A.-based skills David Wiseman, Michael Parker, Shin Okuda, and others. Curved components—reminiscent of the massive, olive-shaped Italian pendant that hangs over the Saarinen eating desk, the spherical cocktail desk by Polish-Brazilian grasp Jorge Zalszupin, and the Lindsey Adelman cluster fixture within the entry—mood the structure’s inflexible angularity.

In the lounge, a pair of Hans Wegner lounge chairs pull as much as a Jorge Zalszupin cocktail desk and a customized couch lined in de le Cuona material. Piet Hein Eek aspect desk from The Future Perfect. Lighting advisor: Sean O’Connor.

“I was raised in Ojai, and the aesthetic of shell mirrors and peacock feathers seems to follow me. For a long time, my version of curtains was a piece of fabric hanging in the window until the sun destroyed it,” Weatherford says of her bohemian predilections. “Working with Oliver, that sensibility is still intact but much more mature.”

Despite the havoc wrought by the pandemic, Weatherford continues to keep up an lively exhibition schedule, having opened latest exhibits this fall at Gagosian Grosvenor Hill, London, and David Kordansky Gallery in Los Angeles. But when the artist isn’t in her studio, her brilliantly restored, rejuvenated, and scrupulously reimagined house beckons. “I could just sit and look out the window for hours at the panorama of treetops, hummingbirds, squirrels, and changing weather patterns,” she says. “It never gets old.”

August 29, 2020
If you have not been living under a rock, you would know that curved monitors are the new generation display units in town, and...
Go to mobile version